Take advantage of the insight, education and advocacy available to members, saving you time and money.

Be a Voice for Change

Create change by staying informed on issues that could change the way you do business.

Ohio voters want more time in the summer to spend with families and to earn money, and they want less time in hot classrooms.

In response to Senator Gayle Manning’s introduction of Senate Bill 34, a bill which would make starting school after Labor Day the default unless local school boards hold public hearings, the Ohio Travel Association worked with a renowned public opinion polling firm to explore how Ohioans feel about the issue. Public Opinion Strategies conducted a survey of 800 registered Ohio voters in September.

Ohio voters want a longer summer break instead of a broken up school year. Fifty-nine percent (59%) of Ohio voters prefer a school start date after Labor Day and 12% prefer school starting the fourth week of August.  That’s 71% of voters who are saying school shouldn’t start before the end of August.

Teachers and parents support the proposed bill which defaults the start till after Labor Day, with 65% of teachers supporting the bill and 61% of parents. Overall, 66% support the legislation.

“What was most remarkable about this survey is that this support cuts across partisan, geographic and demographic lines,” said Neil Newhouse of Public Opinion Strategies. “It’s rare to have an issue with such overwhelming and broad support.”

Voters identified August heat making it difficult for kids to learn as one of their top reasons for supporting a later start. Seventy-one percent (71%) said forcing students to learn when temperatures are in the ‘90s hurts learning.

Ohioans also want greater uniformity in school start dates across the state. The variance in starting dates creates hardships for extended and divided families to plan time together. Comments also expressed that lack of uniformity is confusing for both drivers and truancy officers. 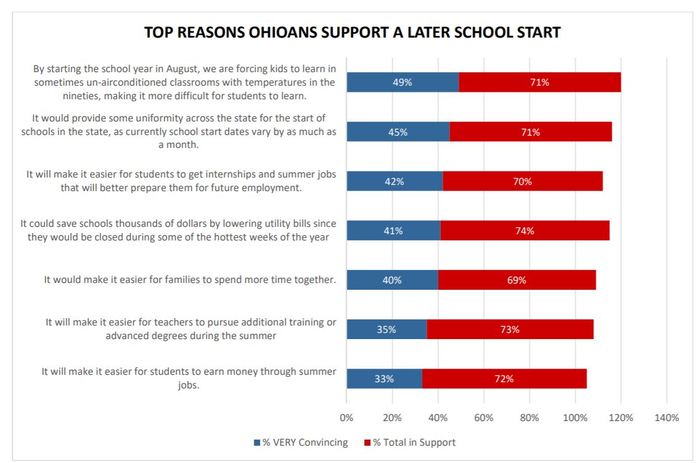 The Ohio Travel Association represents businesses who depend on the $43 billion travel economy, including museums, visitors bureaus, attractions, hotels, restaurants, retail shops and their suppliers. Finding workers is one of the primary impediments to growth of the Ohio travel economy, making a later school start an important issue for these businesses. Extending time for families to travel is also good for the economy, and that means additional tax dollars to support schools.

“We already knew a later school start is good for the economy and can boost local and state revenues to support schools and other priorities,” said Melinda Huntley, Ohio Travel Association executive director. “What we needed to discover is how Ohioans – including teachers and parents – felt about this issue. They are the ones most impacted, and they’ve never been asked.”